2019 was a very active and vigorous year for Latin America. Protests and demonstration broke throughout the region, where social dissatisfaction with state policies and political leaders spread from Haiti through Honduras, Colombia, Ecuador, Bolivia, and Chile. In this convoluted regional landscape, presidential elections were held in various Latin American countries, including Argentina, Uruguay and Bolivia, this last one turned into a particular case in which the disputed electoral results led to the military-forced resignation of former Bolivian President Evo Morales and the following controversial proclamation of a rightwing interim government.

Another busy year for our project! Not only have we continued our database update and addition of new cases, but we have also done so much more! Here’s an overview of some numbers that reflect what we’ve been up to this 2019!

We’ve held five presentations across the world! One presentation in Europe, at King’s College in London, and four presentations in Latin America, where we were present at: the Institute for Social and Political Studies (IESP-UERJ) in Rio de Janeiro, the DAAD event “Deconstructing walls: Democratic processes since 1989” in Rio de Janeiro”, the III ENEPCP Conference in Natal, and in the Open Society Foundations’ event held at Rio de Janeiro.

Our Latinno team also held three meetings with civil society groups in Bogotá, Rio de Janeiro and Montevideo. Additionally, we updated our online database with 260 new cases, closing 2019 with a total of 2620 cases. Finally, we have concluded our Phase II and been granted extended funding for a Phase III, which will allow us to continue our research until the end of 2020 and thus cover 30 years of participatory innovations in Latin America!

Our Favorite Innovations from this Year:

The Povos da Mata Network is the first participatory initiative that establishes a dialogue between family businesses of agricultural production, farmers benefited by agrarian reform, and indigenous and quilombola communities in the state of Bahia. Its aim is to agree on actions and on the certification of agricultural products.

The Ministry of Agriculture (MAPA) authorized the issuance of organic certificates through a participatory process in 2016, through the Participative Guarantee System (GSP). It counts with the participation of 4,200 people who are in charge of agro-ecological management in 14 municipalities of Bahia. In addition to certification, the network promotes training and training through an electronic portal for the sale and distribution of agricultural products.

The project to promote the Law for the Protection of Urban Trees was a citizen initiative launched by the civil association and environmental group “Planeta 4 Grupo Ecologista”. After several peaceful demonstrations in Guanajuato, the citizen initiative led to a draft bill to protect, conserve and foster urban trees and green areas in the cities, with the main goal of protecting the environment and reducing the effects of the intense heat waves that have affected Mexico in recent years.

The draft of the Initiative to Promote the Law for the Protection of Urban Trees was presented by the civil association to the Environmental Commission of the State Congress of Guanajuato on May of this year. Among many other positive impacts, the activists highlight that the initiative will allow an improvement in the city’s ventilation, an increase in green areas, a promotion of an environmental balance and sustainable development in cities, and an overall improvement in the living conditions of citizens in urban areas. 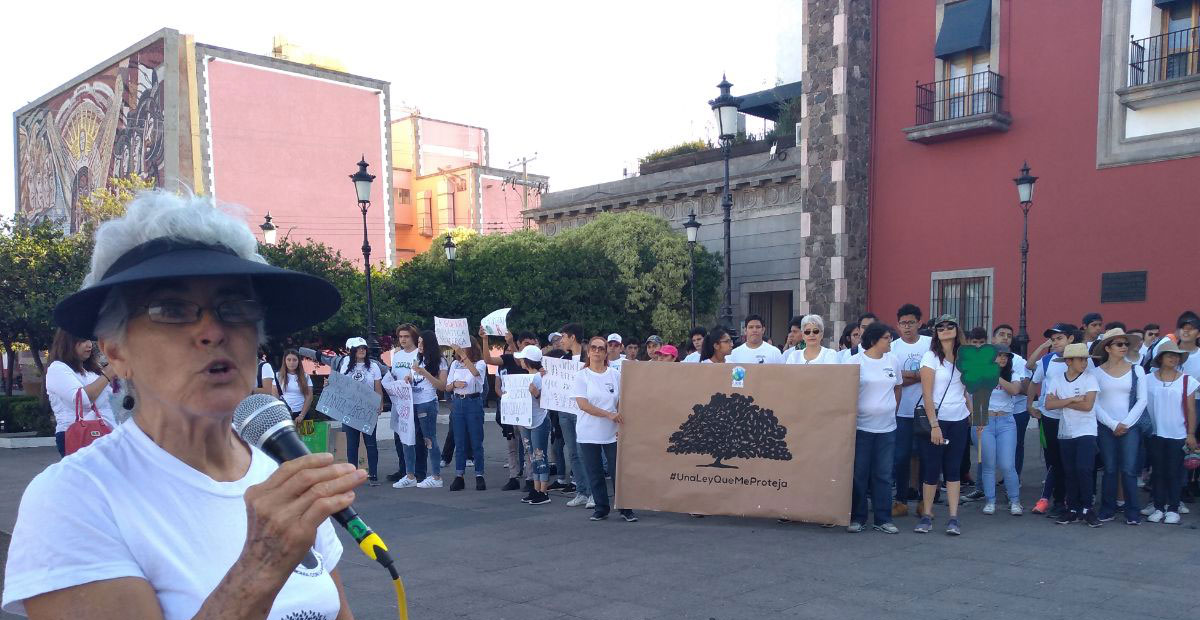 Democratic Superheroes (Span. Superhéroes Democráticos) is a free App created by the NGO Electoral Transparency (Span. ayu) with the aim of fostering citizen oversight and participation in the electoral process of 2019, in an attempt to improve elections and strengthen democracy in Argentina. The NGO’s main goal is to promote election monitoring and to educate citizens on topics related to electoral and party systems, among others. 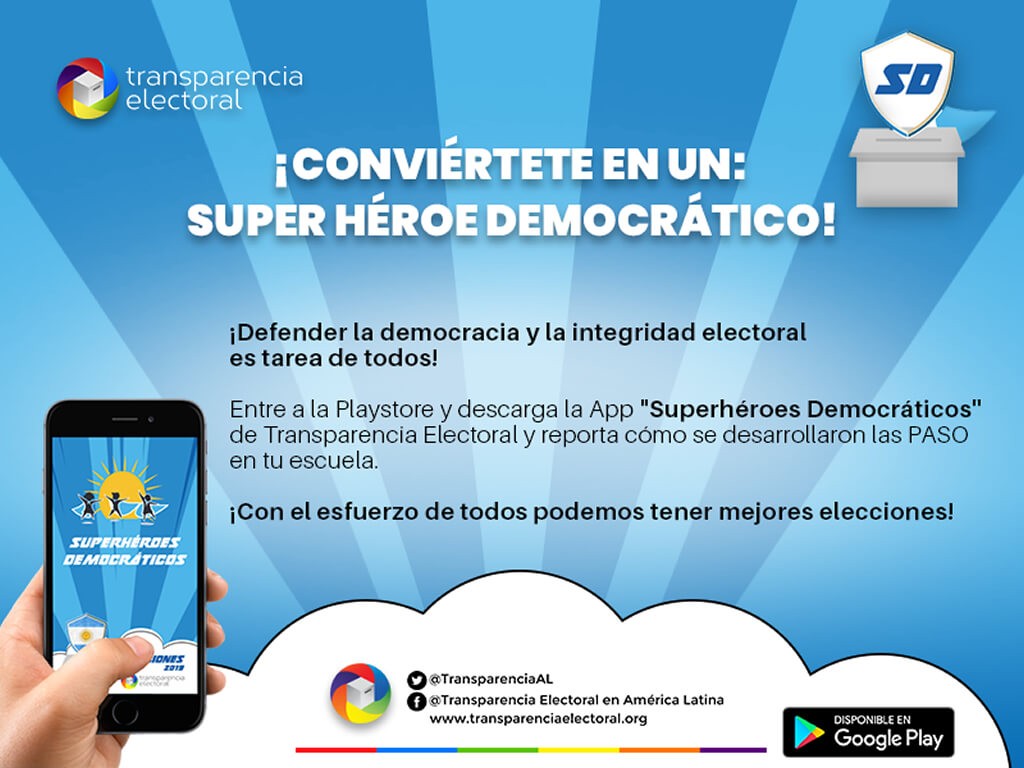 UReport is a digital tool that promotes the political participation of children and adolescents in El Salvador. This democratic innovation seeks to motivate users aged 13 and over (independently of their background) to engage in discussions and express their opinions about the issues that affect their daily lives such as health, education, social inclusion and children’s rights.

U-Report sees the potential in motivating young people take the initiative and report on the social and political unfoldings that affect their surroundings. This is an opportunity to lay the ground for debates that are necessary for positive change in their communities. All contributions are anonymous and are published collectively on the website of the initiative in El Salvador. The initiative is part of a UNICEF-driven project present in more than 30 countries. Its main objective is to provide youth with support networks and reliable and relatable information, so that they can start making use of other spaces in society designed for their participation. 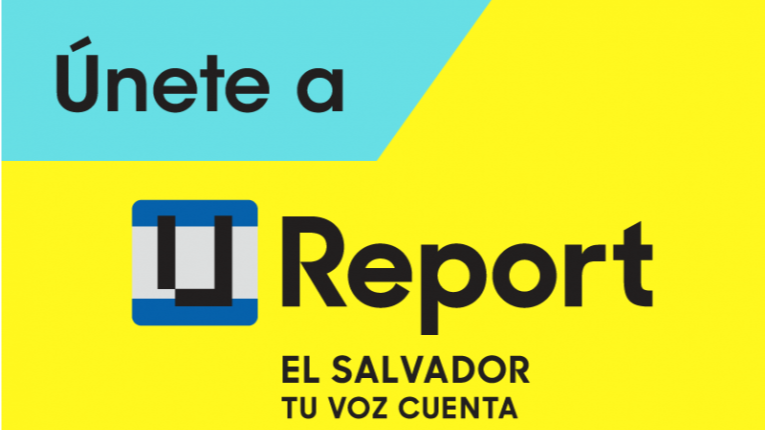 The Innovation Forum for Food and Nutritional Security (Span. Foro de Innovación en Seguridad Alimentaria y Nutricional) is under the direction of the Technical Unit for Food Security and Nutrition, an organism within the Secretary of General Coordination of the Honduran Government. It is an online platform launched in November 2019 that aims to promote the development of solutions to nutrition-related challenges in the country. On the website, citizens have easy access to relevant information, activities and meet-ups concerning the topic of food security.

The main goal of the forum is to serve as a space for professionals, entrepreneurs, businesses and young citizens to share their experiences, discuss financing opportunities and participate or organize workshops to broaden the scope of understanding of challenges and its possible innovative solutions. As a digital tool, the forum is a meeting point for all interested participants to find a common ground and work towards the fulfillment of sustainable development goal number two: zero hunger.

Committees for Aid and Freedom - Venezuela

The Committees for Aid and Freedom (Span. Comités de Ayuda y Libertad) are an initiative of the “Frente Amplio Venezuela Libre” with the objective of organizing citizens at the bases of the opposition. The idea was born as part of the "Freedom Operation", directed by the president of the National Assembly of Venezuela Juan Guaidó. They are formed at the community level, by the citizens' own initiative, following instructions published on the website “operacionlibertad.org”.

The committees are expected to meet regularly to discuss the situation in the country and possible solutions to the challenges facing the community, for example blackouts or shortages. Their activities also include the implementation of contingency protocols for situations such as repression or violence, and the monitoring and dissemination of the information provided by the National Assembly. Their two dimensions entail: activism in the sense of coordinating volunteers and mobilizations, and policymaking in the sense of preparing and executing self-government structures in each sector of society. By the end of 2019, several committees have been created under oath in different regions of the country. 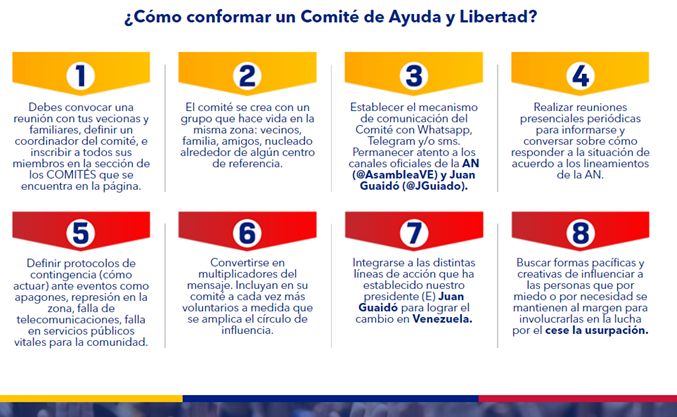 HAPPY HOLIDAYS from the LATINNO team!